Shaikh Abdol-Hamid urged on open-mindness and taking benefit from viewpoints of opponents and supporters to save the country from ongoing crises.
Talking to Shia and Sunni scholars and Ulama of Sistan-Balochistan province who gathered by invitation of the Intelligence Ministry in Zahedan on 16th Dec. 2018, he said: “Ulama know about the Qur’an and Sunnah more than others, so their responsibility is heavier than other classes about society. Knowledge increases responsibility of individuals.”
“Ulama should fear more than others from Allah. They are trainers and reformers of society. Their vigilance is vital for protection of society. If Ulama suffer from affection of money materiality, the whole society will be corrupted,” he added more.
Chairman of the Coordination Council of Sunni Seminaries in Sistan-Balochistan pointed out to the ongoing situation of Iran and said: “We should be united and unity is the biggest need of Iranian nation. As well as we have no choice but increasing our tolerance and open-mindness.”
He said that our supporters cannot tell us our mistakes clearly, but it is easy for opponents; there are points which can be correct.
“Islam teaches tolerance. When we claim we are imitators of the prophet Mohammad, peace be upon him, and Sahabah and Ahl-e-Bayt, we should imitate them,” president of Darululoom Zahedan said.
He also urged on maintenance of peace despite crises and problems.
Shaikh Abdol-Hamid called on Shia and Sunni Ulama and authorities to listen to people and take care of their demands. 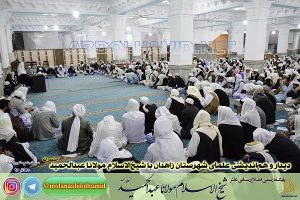 On the same day, in another meeting Sunni scholars gathered in Grand Makki mosque after Maghreb prayers.
In this meeting Mufti Mohammad Qasemi and Shaikh-ul-Islam Mawlana Abdol-Hamid talked to the scholars and urged on self-reformation and planning for people’s religious needs.
Shaikh Abdol-Hamid addressed Ulama and said: “We should ask ourselves that what we have done for our reformation? Do we awake family members for prayers too when we get up?”
“It’s regrettable that during history contemporary Ulama had hatred, spite and jealousy with each other. Ulama should uproot such bad illnesses; they are assets and hope for any society,” he added more.